Fladder® Finishing  - the way to a better finish

It is a well-known fact that a wooden surface becomes rough after sealing.

Because of the pressure of the abrasive material against the surface,

the wood’s fibres are severed, resulting in microscopic fibres creating a ’fuzzy’ surface.

During the following sealing process, tension is generated in the fibres

causing them to rise, and thereby giving the surface a rough feel.

The presence of these fibres must be minimised or efficiently removed

before or after the sealing process.

The solution is to use the FLADDER® sanding system - an innovative

sanding method based on sanding principles which are fundamentally

different from those of traditional sanding methods.

Rather than sanding with a constant pressure against the surface, the

aggression is created by the sanding tool’s rotating speed.

before and after sanding with the FLADDER® sanding system. 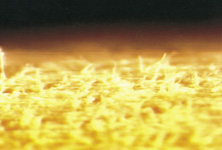 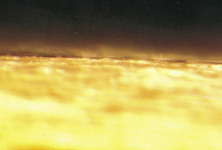 ● Up to 30% reduction in sealer/primer consumption

The figur below shows the difference between a normal, sealed surface and a

surface sealed after a FLADDER® finishing.

On the FLADDER® finished surface, the amount and length of the fibres are reduced.

- less sealer is required to effectively seal the surface,

- less sanding is required, and

Sharp-edged parts often cause problems in connection with sealing or sealer sanding.

The sealing layer on sharp edges is very thin, and as a result the sanding often penetrates it.

Figure D below shows a profile with sharp edges.

On the surface treated with FLADDER® finishing, the edges have been rounded slightly,
but not so much as to cause the part to lose its definition.

As a result, the sealer is able to better enclose the edge, and the risk of sanding through

has thus been minimised.

This problem occurs most often on stained surfaces.

The different fibres on a sanded surface do not always absorb stain uniformly. The look

of the surface vary in areas where the stain appears darker.

This is shown in the Figure  below. 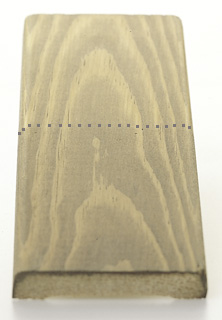